If you’re considering remodeling your master bathroom, which features do you most want to upgrade? If you’re like a large contingent of renovating homeowners who shared their priorities with Houzz recently, your shower area may top the list. 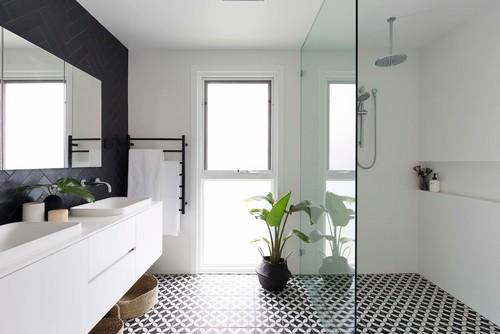 Showers are a popular feature to change: The survey found that 81 percent of renovating homeowners upgraded this area.

The 2017 U.S. Houzz Bathroom Trends Study asked more than 1,200 U.S. homeowners — who were planning, were in the midst of or had recently completed a master bathroom project — about their spending and priorities. Read on for some highlights they shared.

Faucets, wall finishes and countertops are ripe for change. Compared with last year’s study, homeowners this year were somewhat less inclined to remove all the features in their master bathrooms and start from scratch. But if they were going to change something, it was likely to be their faucets, wall finishes, countertops and flooring — the most frequently cited items to be changed in this year’s survey. 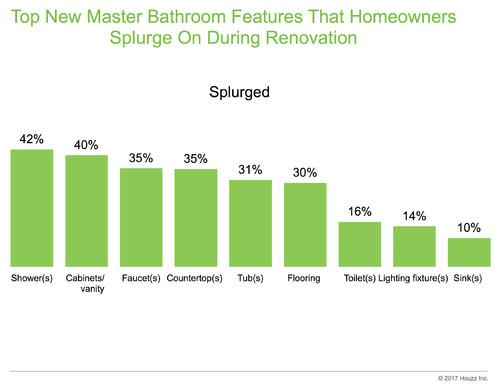 Indulgences include showers and vanities. Among renovating homeowners, the most common splurges during master bathroom renovations were showers, cited by 42 percent of respondents, and cabinets or vanities, cited by 40 percent. 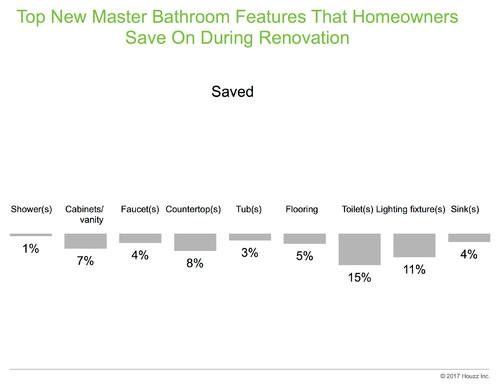 Toilets, not so much. If there was any feature on which renovating homeowners collectively decided to save, it was the toilet. About 15 percent of renovators said they saved on toilets, while 11 percent saved on lighting fixtures.